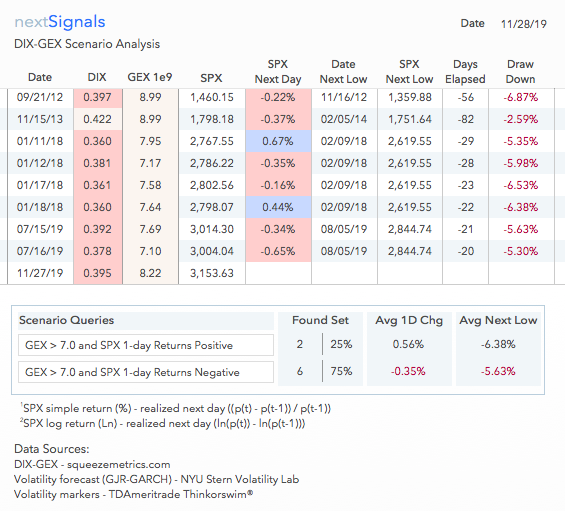 Simultaneous selling by dark pools and significant changes in GEX have proven value in forecasting market down-turns in $SPX. (…more)

I looked at the forecasting value of high GEX signals > 6 and, by themselves, the forecast potential was lacking. However, when I queried the database for GEX values greater than 7, the combination of low DIX and high GEX occurred eight times and appeared significant.

First, nearly all of the high GEX readings were linked to dark pools’ selling into rallies that were already long in the tooth. Second, all of the signals resulted in significant down-turns …about one month later.

Of the eight occurrences, some were redundant, leaving effectively four coincident signals …that is, four times when low DIX/high GEX forewarned of a relatively imminent and consequential correction.

The combination of low DIX and high GEX (>7)  appeared, on average, 35 days before a market decline of about 6%.