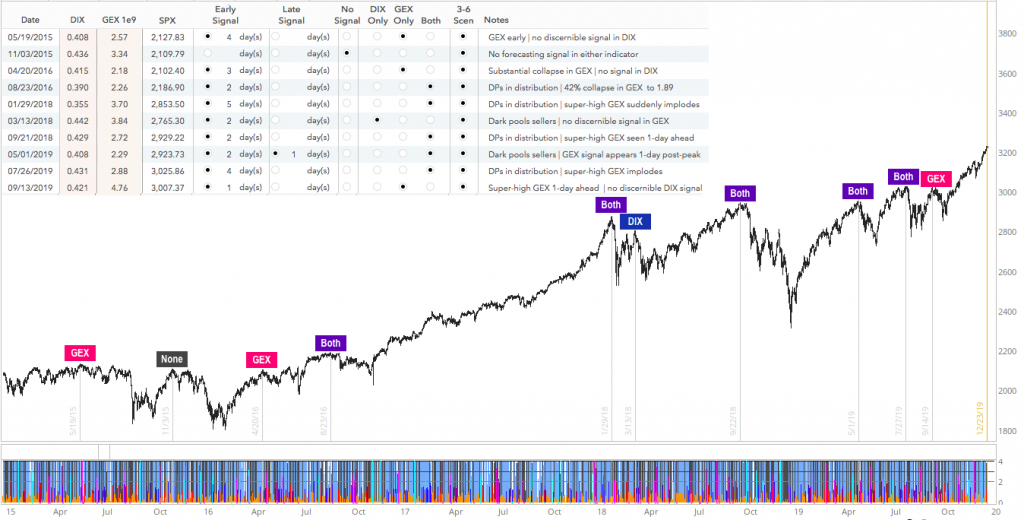 Introduction: Predicting market declines is a challenging problem for investors.   Different from technical indicators, data-specific metrics may have the potential to characterize the market condition at the current time. And as the predictive power of individual variables is weak, integrating multiple datasets might reduce uncertainty and support decision making when rallies are “…long in the tooth.”

Methods: Using a zig zag indicator, peaks in the S&P500 index that were followed by significant declines were identified. There were ten such peaks during the 5-year period from December 2014 to present. Next, dark pools’ short sales and gamma exposure indices[1] were examined pre- and immediately post-rally peaks. The simultaneous appearance of a momentum indicator commonly found at rally highs was also recorded.

Results: The conclusions in this updated analysis are essentially identical to those earlier posted, here.  However, a better understanding of what might constitute trading signals emerged and is described in the ‘Notes’ section above. One or both of two signals – dark pools’ short sales volume and significant changes in gamma positioning – were present nine out of ten times within 5 days preceding a significant selloff. Gamma positioning, alone, contributed to decision-making eight out of ten times and the dark pool index signaled seven out of ten times. Not surprisingly, a loss of momentum combined with selling pressure (“3-6 Scen’) occurred at every rally peak.

Conclusion: Coinciding changes in the trading behavior of off-exchange speculators and options market makers often leave footprints ahead of market turning points. If appropriately interpreted within the broad context of live market forces, the coincident signaling of a dark pool index and a measure of delta-gamma hedging might assist in averting losses attributable to imminent retrenchments in the S&P 500 Index.