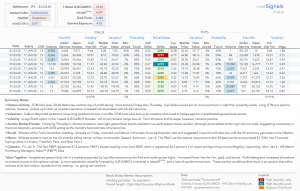 • Valuations:  Calls underpriced as traders cover long positions to lock in profits. OTM puts were bid up as investors continued to hedge against unpredictable geopolitical events.

• Bonds:  Minutes of the Fed’s December meeting, released on Friday, reported confidence in the labor force participation rate and suggested it would hold rates low until the US economy generates more inflation.

Taken Together:  Heightened geopolitical risk in a market supported by liquidity injections by the Fed and marking new highs.   Increased flows into the Yen, gold, and bonds.  Profit-taking and increased allocations to protective puts in the options market.  A more pessimistic volatility forecast by GJR-GARCH, a reversal in m(vol) Γ ATM,  and a loss of upside momentum.  These are the sort of conditions that result in an auction that either retraces to its last node or spends its time rotating – i.e. going net nowhere.