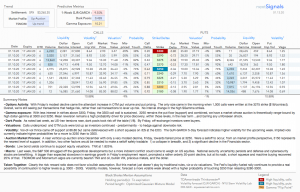 • Options Activity:  With Friday’s modest decline came the attendant increase in OTM put volume and put pricing.  The only size came in the morning when 1,000 calls were written at the 3275 strike ($18/contract).  Overall, we’re still seeing put transactions to hedge risk, rather than call transactions to lever up risk.

• Gamma exposure:  With less interest in strikes above 3300, Friday, the 3300 call wall is sustained.  3250 remains the put floor (support) and combined, we have a market whose auction is theoretically range-bound by high dollar-gamma at 3300 and 3250. Mean reversion remains a high probability driver for price discovery, within those levels, in the near term …and barring any unforeseen shock.

• Valuations:  Calls underpriced  and OTM puts were bid up as investors continued – predominantly – to hedge against downside risk.

• Volatility:  Vol-of-vol thrice came off support at 86.86 but defervesced with a short squeeze on /ES at the EOD.  The GJR-GARCH 5-Day forecast indicates higher volatility for the upcoming week. Implied vols currently indicate higher probabilities for a move to 3250 than to 3300.

• Auction Market Process:  A near vertical up-auction since December with only a very modest decline, Friday, towards fairest price at 3250.  Were a selloff to occur, from an market profile perspective, 3150 represents the nearest level of support. In addition, two other factors would be needed to make a selloff safely tradable:  1) a collapse in breadth, and 2) a significant decline in the Financials sector.

• Macro:  Last week, the S&P 500 shrugged off the geopolitical developments but a more indolent conflict could come to weigh on US equities.  National security uncertainty persists and defense and cybersecurity stocks are benefitting.  A bigger than expected slowdown in earnings growth in Friday’s employment report, prompted a rather orderly 20-point decline, but at its nadir, a short squeeze and machine buying recovered 25% of that.  TSMOM and Momentum algos are currently bearish TNX and oil, bullish VIX, precious metals, and the dollar.

Taken Together:  Clearly the risk: reward ratio does not favor a bullish assumption. But this market just doesn’t play by traditional rules, viz-a-viz valuations. The Fed’s liquidity-fueled rally continues to provide a real possibility of continuation to higher levels (e.g. 3300 – 3500).  Volatility models, however, forecast a more volatile week ahead with a higher probability of touching 3250 than retesting 3280-3300.